This is Angel. She was found this past winter in an abandoned lot. ( It really was winter where she was.) It was snowing, there was ice on the ground, and it was bitterly cold. She was chained up on a short leash with her food just out of her reach. Food that was FROZEN I might add! She had water, but it too was frozen.  After seeing her several times with no humans in sight and knowing that the weather forecast was calling for more snow and wind, her rescuers decided to take action. They knew that they could not leave this sweet girl behind. They took her to a vet where she was found to be malnourished, and filthy but otherwise still in fairly good health. These good people decided that Angel had had enough of the cold. She needed to be in a warm home filled with love! They brought her home and just a few months later she has put on the weight that she needed, and her coat is soft and glistening! Isn’t she gorgeous! 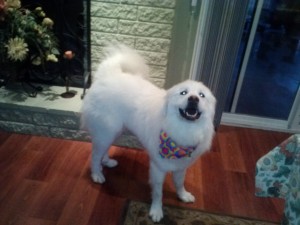