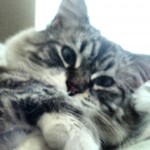 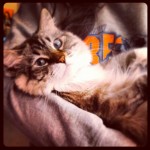 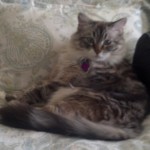 Not long ago, a friend called me and told me that her family’s 3 year old cat “Dandelion” was ill. She had started to urinate outside of her litter box, she was vomiting, not eating, and becoming more and more lethargic. My friend brought her in for an exam and comprehensive blood work. Dandelion was extremely weak, and depressed. We gave her some fluids and instructed the family to try to force feed Dandelion while we awaited our results. ( Cats can’t go very long without eating before damage to the liver occurs. After a short time without food a cat’s body begins to send fat cells to the liver to convert to energy. Therein lies the problem…cat’s bodies  don’t metabolize fat well at all! The buildup of fat cells in the liver prevents normal function & can result in death.)

Dandelion’s blood work revealed severe liver damage! However, we did not know the cause. Could it be idiopathic (meaning we don’t know the cause) Could it be secondary to another disease like cancer, or could it have been caused by a toxin.  Whatever the reason, the next step was hospitalizing Dandelion & giving IV fluids and possibly doing an ultrasound.

When Dandelion returned I was immediately alarmed and afraid for her. She had become extremely jaundiced. (yellow skin) The prognosis at this stage of liver disease is pretty grim. I mentioned that Dandelion belonged to a friend of mine. But to be more specific, she belongs to my friends daughter who also happens to be one of my daughters BEST friends! This wasn’t just a cat to this family. She was a family member!

Despite all of our efforts, when we rechecked Dandelion’s blood work her values were not improving. In fact, they were worse !  It was with an extremely heavy heart that I broke the news and told my friend that at this point they should consider euthanasia since we didn’t want Dandelion to suffer. She agreed and said that they would take Dandelion home for one last night. They  would return the following day for their final goodbye.

I dreaded the next day! Not only for Dandelion but for the child. How could I possibly be a part  of euthanizing her beloved cat! Would she always associate this painful memory with me?( I know that probably sounds selfish, but I couldn’t help think these thoughts) That night I silently asked God for a miracle. “Please, please save this cat! A miracle is all she has left!” Dandelion’s family was praying for a miracle as well.

The next morning when I spoke to my friend she said that Dandelion seemed to feel a little better. She had kept some food down, and had a little more energy.  So, it was decided that we would give her a little more time…at least through the afternoon to see how she was fairing. The afternoon turned into the evening, and into the next day as Dandelion began to show marked improvement. She was eating and drinking on her own, she was more social, and her jaundice was subsiding! We had our miracle!

Three months later, Dandelion is back to her sweet self with no signs of going anywhere anytime soon! The holiday season seemed like a great time to share this inspirational story. Believe!!